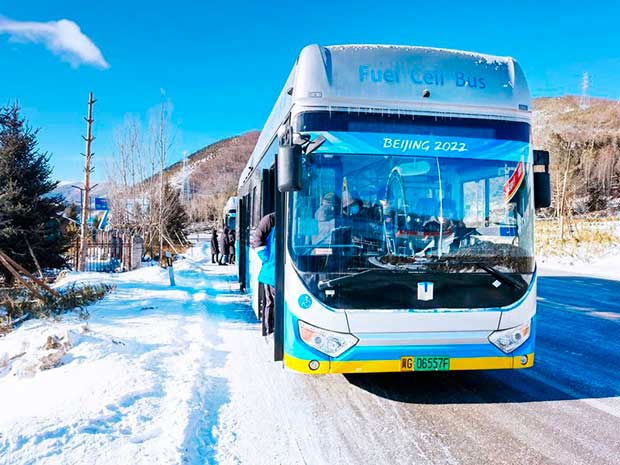 For many, the 2022 Winter Olympics has been a wonderful contest to watch from a sporting perspective. Seeing athletes compete in the kind of sports that we tend not to watch all-year round is truly enjoyable. However, another aspect that is enjoyable to watch around an event like the 2022 Winter Olympics in Beijing is the organization of the event itself. Take a look at the vehicles being used, hydrogen fuel cell vehicles.

Compared to other vehicles that are used in day-to-day life in China especially, these run with a much cleaner source of energy. Indeed, many of the vehicles being used such as the cars and buses are being powered by using hydrogen fuel sources. During the 2008 Olympics, we got used to seeing electric vehicles being used around the place; this edition of the Olympic Games, though, is putting hydrogen front and center.

China used the 2008 games to show the importance of using electric vehicles which, at that time, were still a product of the future. Today, using EVs is something that many of us around the world now enjoy as part of our day-to-day life. Indeed, sales are forecast to hit 10m in 2022 alone; this shows how much electric vehicles have grown. Now, hydrogen vehicles might be getting the same kind of spotlight as their electric counterparts enjoyed 14 years ago.

EVs have become a mainstream vehicle option, and it is hoped that in time the hydrogen vehicle industry might enjoy the same kind of boost and boon as we are seeing here.

Though still a technology that many do not know about or truly understand, hydrogen vehicles are growing in popularity all the time. They have become immensely popular within the tech industry, seen as the ideal next step in our development towards greener vehicles. Given that over 300 million vehicles are on the road in China, and less than 9,000 of them are powered with hydrogen, the hope is that showcasing them at the Olympics will encourage more consumers within the nation to adopt this as their next vehicle of choice.

Indeed, China has a lot of work to do if it wishes to keep pushing this route. Like many other nations, they have an issue when it comes to public awareness regarding the benefits of hydrogen. Unlike other nations, though, China has been adept enough to showcase these vehicles – just as they did in 2008 – in a highly visible, mainstream event.

This is very important, as if hydrogen is to succeed and become as popular as other options such as EVs it needs to be given a platform. Many are unaware of hydrogen powered vehicles and the benefits, and it is events like the 2022 Olympics that will play a vital role in ensuring that this is more visible than before.

So, the 2022 Olympics could – we hope – have the same positive benefit that 2008 had for the EV industry. Either way, this is an important next step in making sure that awareness of the possibilities of hydrogen are not ignored.