[Hi all. I’m reposting this piece I wrote with my Net Positive co-author, the great CEO Paul Polman, in MIT Sloan Management Review. The issue of companies saying one thing on climate for their own goals, and saying a different thing through their silence or trade associations, is a critical issue, right now in the U.S. The budget bill, with massive and needed investment in climate action, is still being held up, in part because it pays for it by rolling back tax breaks to companies — so many of our climate leaders, including tech giants, are staying silent and watching as the U.S. Chamber of Commerce tries to kill it. Not good.

I’m also working on my annual year-end wrap up (last year’s was “How Did Business’s Role in Society Change in 2020”). It’s usually a link-a-palooza with dozens of stories from the year. But there’s really too much going on in corporate sustainability or the broader role of business in society to capture it all — that’s good news, as the movement gains steam. Every week, as captured in newsletters like the one from our friends at Corporate Eco-Forum, there are more great stories than you can read. I’ve saved stories that grabbed me periodically — it’s not scientific — and I’m going to post a bunch of stories here next week.

I’m asking for your input also. Any specific stories or big themes grab you this year? Let me know…]

by Andrew Winston and Paul Polman

The world’s largest companies are rapidly raising the bar on their commitments to tackle climate change. Dozens recently put net-zero goals in place to eliminate carbon from their operations and often their entire value chains as well. Hundreds have committed to using only renewable energy. More than 1,600 say they will cut greenhouse gas emissions at the pace scientists tell us is needed to avoid the worst climate outcomes (that is, they’re pledging a science-based target). And banks, long the laggards on climate action, are funneling trillions of dollars toward clean technologies while moving their investment portfolios away from fossil fuels.

This is good news and an important part of the “net positive” movement the world needs. (We outline many of these steps in our new book, Net Positive: How Courageous Companies Thrive by Giving More Than They Take.) But there’s a problem: When companies make big statements about how they will power and operate their businesses, you’d think they would want to align all aspects of their operations and use all of their influence to get there. They would want to support policies that accelerate the shift to clean technologies, right?

Unfortunately, there’s still a vast disconnect between big company goals and what those companies are advocating for in the halls of power. It’s common to see a gap between what companies say and what they do. This gap is less a “say-do” problem than a “say-say” issue: They tell the world one thing but say something quite different (or just stay quiet) behind closed doors. Whether willful or just negligent, staying silent on policy (or outright lobbying against climate action) encourages governments to proceed slowly — and that’s time we don’t have.

Measuring the Gap in Public and Private Talk

To measure this gap in rhetoric, the nongovernmental sustainability advocacy organization Ceres looked at (1) whether the S&P 100 companies are supporting aggressive, science-based climate policies and (2) how misaligned those policy interactions are with the companies’ public statements and goals.

The results, released in the report “Practicing Responsible Policy Engagement: An Assessment of Large U.S. Companies,” are not great. Ceres reached three broad conclusions, all of which demonstrate huge gaps and the say-say disconnect among the largest 100 U.S. companies:

This say-say gap on climate is increasingly hard to hide: The transparency-inspired think tank InfluenceMap gathers and publishes extensive data on corporate and trade association lobbying on climate, and organizations like ClimateVoice (Andrew is on their board) are applying pressure, in part by leveraging companies’ own employees.

Even with rising pressure, a few things could explain why companies have created this gap at all. Cynics would say it’s just all greenwashing. That’s true in some cases, especially with fossil fuel companies and others with a vested interest in the status quo. Less insidious reasons like inertia also play a role — companies have been doing things a certain way and have belonged to their trade associations forever. But for most, two big reasons likely create the gap. The first is mistaken priorities. The second is a dated and misguided narrative about business and government.

How do companies prioritize what government policies to advocate for? In every sector, a handful of rules or topics are clearly core to the business. Tech companies want intellectual property protection, for example. Food companies want to make sure agriculture bills contain large subsidies, or they want supportive international trade policies. But outside of the energy business, most businesses seem to feel that climate is a “nice to have” policy issue.

To be blunt, they’re wrong.

At the macro level, business won’t do well on a planet where large parts of it are uninhabitable, or where a billion or more people are forced to find new places to live. At the corporate level, the cost of doing business in a world of weather extremes is rising, and supply chains are already being disrupted. There are risks to many businesses that they haven’t yet priced into their planning. Food or forestry will face droughts, invasive species, and shifts in what grows where. Extreme weather is bringing down power grids — an especially large risk for tech companies promising 24/7 availability. (A number of years ago, Microsoft assessed its biggest risks, and energy wasn’t on its radar. When the chief environmental officer suggested it rethink that, leadership dug into it, got alarmed, and put energy among its top three risks. That led to aggressive investments in renewables and efficiency.) In short, given the general threat to humanity and business, climate change should be a top priority for all sectors.

The second problem is the story business has told itself for decades: Free markets solve everything, government is always a problem, and lobbying efforts should mainly work to stop regulation. Nobody would claim that government policies are perfectly designed, but they’re needed, especially on big, shared issues. Climate change is the ultimate systems problem, with connections to every company and person on the planet. We can’t solve it without business, government, and people (civil society) working together. We need investment at a scale that requires both public- and private-sector participation and some form of a price on carbon, which only government can establish and enforce.

The story about policy is just one key part of the larger shareholders-above-all obsession that has gripped business for decades. It drives a profound focus on the short term. If you’re thinking about this quarter, of course you don’t want any regulations that may raise costs in the short run or force you to find new ways of doing things. But with a longer-term view, the business will be better off if we all tackle climate and invest in the solutions. The costs of clean technologies drop with scale, while the overall health of people and planet improves and, well, we save the world (which seems pretty valuable).

Deep down, business leaders know this. They want to be net positive. They’re increasingly showing it through their public statements and commitments. One solution to closing the gap between what they say about their own climate goals and what they say about policy is to change the narrative. Leaders need to openly challenge the fairy tale of perfect, market-driven businesses fighting against horrible, anti-business government policies. They should work openly, genuinely, and respectfully with everyone who has a stake in a stable climate, including policy makers. Setting big goals takes companies halfway there. Going all the way requires a new story and the courage of our convictions. 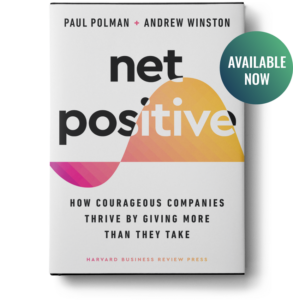