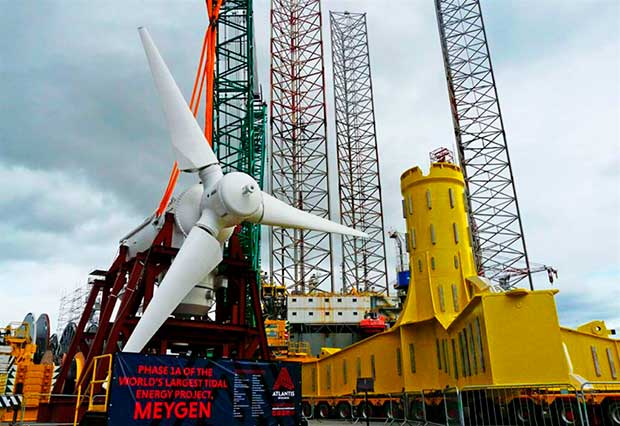 Finding new sources of energy is absolutely essential if we wish to make sure that our planet can thrive as opposed to simply survive. That is why many nations and companies are looking closely into the development of tidal power solutions. Tidal power converts energy from the tides into electricity and be used for just about any method you can think of. Yet, despite the massive amounts of water on this planet, many countries have not adapted the use of tidal turbines quite yet.

Tidal energy is seen by many as the ideal source of power as tides are far easier to predict than even solar energy or wind energy. Tidal power, though, has often been seen as the most expensive and least available of the ‘big three’ renewable energy sources. Given the somewhat limited quantity of areas with the correct tidal currents, too, it has been hard to sell tidal energy as the mainstream means of changing how we power our societies.

The group announced that they had managed to grid-connect the power needed for the European Marine Energy Center in Orkney, using this new turbine to help power everything. Connected to the onshore electrical networks using undersea cables, the entire turbine is anchored to the floor of the sea at four key points. It is expected to provide a 15-year lifespan and could provide the power needed to power around 2,000 homes.

However, the group have also made clear that they are committed to delivering power o the Marine Eenrgy Center’s onshore electrolyser; this is used to generate green hydrogen. The investment and the construction if this particular turbine was funded by the Scottish Government and other investment platforms.

Thanks to support coming from the European Regional Development Fud, and the Horizon 2020 program led by the European Union, the hope is that even more turbines can be developed with multi-MW installations being installed as time goes on.

Other groups who are involved in this same kind of work includes the likes of Simec Atlantis Energy, who operate using the MyGen tidal stream array which is based around 2km from the north-eastern tip of Scotland. Indeed, the project was able to break records in the past when it sent a whopping 13.8 gigawatt-hours of electricity to the power grid in 2019, which was double what was produced in 2019.

With more and more companies getting involved in the tidal energy industry, it will be highly interesting to see how much more progress is made. Given the high costs of tidal energy, extra deployment and funding can only help to bring costs down as companies and governments see the benefits of using such a source of power for the years to come.