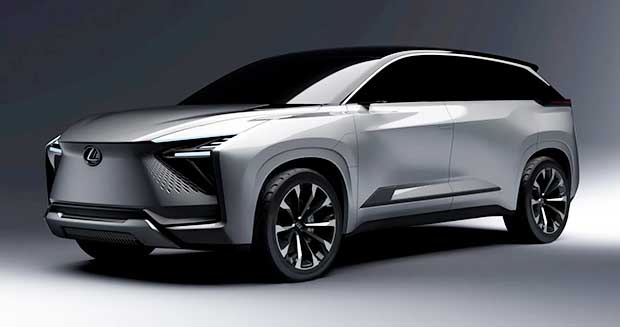 For years now, electric vehicles (EVs) have been growing in popularity with the ordinary driver. Those at the top end of the driving scale, though, still like their classic high-class cars. For that reason, getting people who tend to drive brands like a Lexus to buy-in has been increasingly challenging. Part of that challenge stems from the lack of mileage; well-off drivers do not want to be stopping every few miles to charge-up. Therefore, the news of the new Lexus EV that can offer 430 miles of range should excite.

These exciting new images are coming out of the new Lexus electric sports car ranges. These are high-class vehicles that look like a match of the grandiose and opulent normal models. The use of electric power sources, though, means that the vehicle will feel very different to the typical gas alternative. With such a huge mileage range, though, there can be precious little complaint from those taking in long journeys.

The new images have been released of this range, showing a typically sleek and stylish looking car model. The improved range, though, is being shrouded in somewhat vague language during the release of the images.

Toyota has been moving at pace in recent years to try and make up for its tardy progress into the EV market. As other competitors have left them behind as they innovate, Toyota are now looking to catch-up in quick time. their development of some very exciting EV-powered models is an exciting new step for the company. However, they still retain a clear focus on hybrids and the development of fuel cell hydrogen powered vehicles.

However, this new battery-electric solution can go even further in taking Toyota in line with the competitors who made the move years ago.

However, in the press release, people were quick to note the rather vague language being employed by Toyota. For example, they mentioned that it “could exceed” 430 miles but were not committing to that being a definitive factor. At the same time, they also were quick to use terms like a “possible” solid-state battery, as opposed to committing in full to this being the case.

These vague terms and rather lacking language have some concerned that these images might be the best we see from this range of vehicles. With so much need for Toyota to try and catch up with the other industry giants, this has to be a successful release. The use of such tepid language, though, has played a role in pouring cold water over the excitement that should be coming from this highly exciting news release.

Whether or not Toyota can bring back some enthusiasm for the release with more meaningful and particular details remains to be seen. For now, though, those who are keen to see how Toyota move into the EV market might be slightly disappointed at how this release has come through following the much-anticipated press release.