Green Roof Professionals around the globe often wonder or speculate how and when the commercial modern Green Roof industry really took off. There are many opinions and alternative facts out there but only a few really know that the hot spots with patents were in Basel Switzerland and in Stuttgart Germany for seamless or wall-to-wall Green Roof systems.

The World’s first modular (or tray) system has been developed in Stuttgart by Brecht and Hämmerle, mainly known as the Brecht System (if one doesn’t consider terracotta pots on roofs as a modular system). 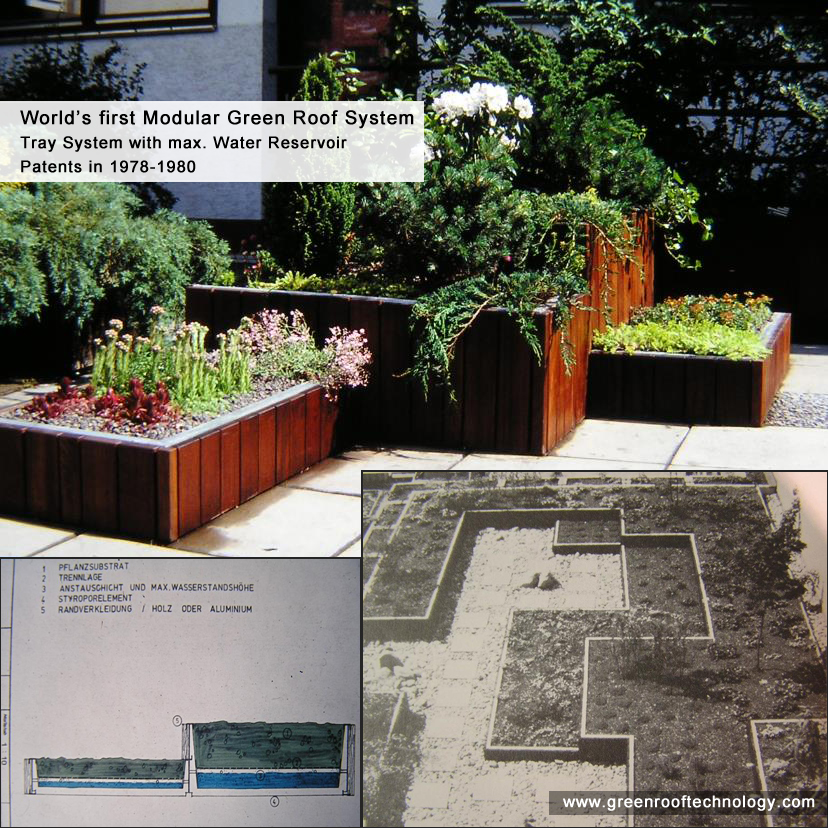 The Brecht System was a basic polystyrene box with a three-layer Green Roof system. The system was available in extensive, semi- intensive and intensive planting depth. With this simple three-layer system the inventor combined many benefits in one box. All systems had a water reservoir for maximum water retention – more than any other Tray system currently on the market and more than any fabrics, foams or mineral wools, and the boxes contained standard nursery soil for a healthy fast growth and to lower costs.

There were different options for covering the less attractive boxes, with either wood or metal (aluminum). Today we call these frames around the boxes: Edging.

Based on the polystyrene, the boxes were very lightweight and easy to install. Actually, they fitted into each other to create different heights and different planting depths. I would describe them as a Modular –LEGO-like planting system.

Unfortunately, any polystyrene as a limited lifespan when exposed to UV or biological activity and so many of these roof gardens had problems after 5-10 years. Further, many of the plants rooted out of the boxes (drainage holes) and penetrated the waterproofing.

Around 1992 the last Brecht System was removed and replaced by wall-to-wall or seamless Green Roof systems. All of these Green Roofs are still existing – if the building still exists.

The Brecht Modular Green Roofs system had also other issues that are similar to the currently existing systems. However, nowadays the tray systems use metal, other plastics, and mainly with irrigation systems. This makes them last longer, but as often only delays the point of failure. The roots of plants and the biological activity on healthy Green Roofs are often underestimated as well as the functional lifespan of foams, polystyrene drainage mats, and mineral wool products.